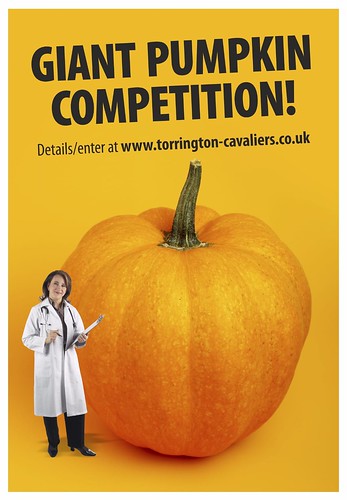 We can't do any bonfire building at the moment, so we've resurrected a popular competition from a few years ago - GROW A GIANT PUMPKIN! Simply pay a £5 entry fee and we'll let you have a baby pumpkin plant that you can nourish and grow, and the biggest pumpkin will win a CASH prize! The weigh-in will hopefully be on the 1st November. Unfortunately, we can't courier plants so all the babies have to be collected from Torrington. Please call Dick Matthews on 01805 622573 or Chris Tattersall (who has the plants) 01805 622243 to register and find out details of how to collect your plant.

The entry fee can be paid via PayPal or cash on collection.

We are a long established fundraising group who donate any monies raised to local charities. We take part in many local events, but our main events are always giant themed Bonfires. In August 2005 was a half size replica of Nelson's flagship HMS VICTORY. It was built over 2 years as part of the 200th anniversary of the battle of Trafalgar. On the night of August 27th 2005 we set light to the structure to stage our own celebration of the battle and Nelson's historic victory. It was watched by 20,000+ people and had outside broadcast teams there from most TV and media organisation's including SKY who broadcast globally this year!.

Great Torrington has always been a "different" town. In the civil war the population sided with the King whilst all around the area others fought for the Roundheads. Today, despite many setbacks on the employment front, the town is home to a thriving community. Torrington is known as the friendly town and we warmly welcome visitors to this latest Cavalier event. The Cavaliers were born in 1970. Plymouth hosted a county wide carnival inviting entries from all the towns in Devon. A group of (then) young men dressed themselves in the uniforms of Cavaliers and entered a float depicting the old parish church which, in 1646, had been accidentally blown up by the Roundheads whilst 300 Cavalier prisoners were locked inside. (The Church was "rebuilt" in 1996 as the theme for that years bonfire). Subsequent to the visit to Plymouth the group decided to continue in being. Led by the late Larry Alexander (Lardo) their mission was to put on events "the like of which Torrington had never seen before".

With their bonfires the Cavaliers have achieved national, and international recognition as builders of sophisticated structures, following as near as possible the design of the original. Each bonfire has been declared "better than the last one" although those that remember for instance the 1970's fire of the German battleship Bismark might disagree. The aim of all the bonfires is to raise money for local good causes. In recent times the 1996 event raised well £20000, most of which went to North Devon Cancer Care, and in 2000 over £40000 was raised, the main beneficiary this time was the Devon Air Ambulance who received a cheque for £20000 being the largest single donation ever received. 2005 HMS victory raised over £50,000 and 2015 Trumpton raised £50,000

Building bonfires is only a small part of the Cavalier activities, over the years they have worked around the town raising money for charity or physically setting to projects to enhance the town or help individuals. An active membership of around 40 is supplemented by many, many friends always available to give a hand. Work hard, play hard has long been the motto of the Cavaliers and "events the like of which etc,etc." remain one of the enjoyable rewards of belonging to the organisation. With your support this latest bonfire will again result in helping those less fortunate than ourselves.